A rejected planning application turned into an opportunity for the owners of an 80-year-old cottage to make the most of its stunning South Downs location.

When their submission for a garage extension was turned down, Sussex couple Kieron and Nicola started thinking about how to make the most of their extraordinary natural surroundings, whilst also creating more space.

They opted for an oak framed orangery which has added more than fifty percent to the cottage’s floorplan, while timber bi-fold doors open the generous family living space out into the countryside. Natural oak beams bring these two worlds together, while adding warmth and definition to the remodelled interior.  See all images of this project in our oak extensions gallery. 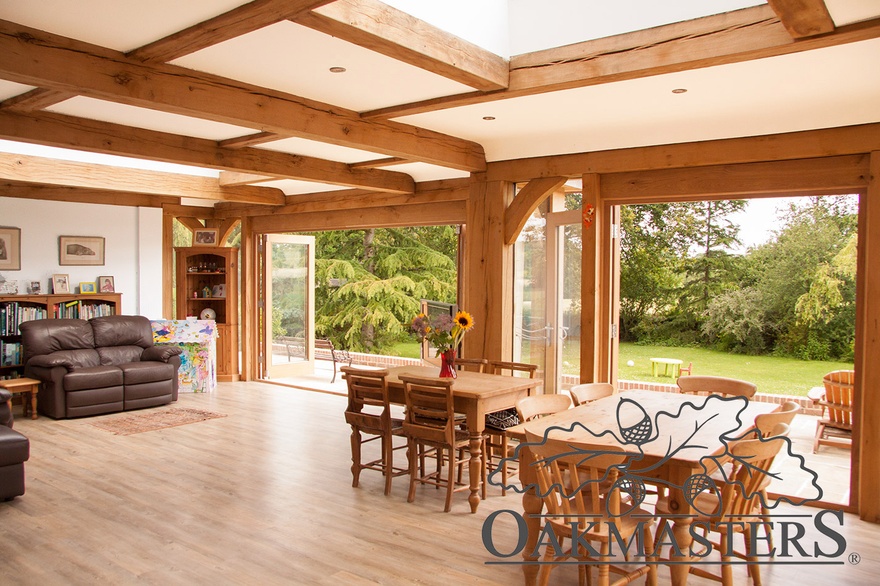 Kieron and Nicola wanted to add a bedroom to their Sussex cottage, while significantly increasing the main living space.The original living room had two large sets of uPVC sliding doors which provided a good view to the rear of the house, but wasted the opportunity to enjoy beautiful views to the side, across the Downs.

Before settling on an orangery the couple’s initial idea was to build over the garage, but the planning application was rejected as it was out of keeping with the area. “We were faced with the prospect of a build out into the garden, which was ok as it’s a large garden” says Kieron. “In fact the rejection gave us the opportunity to look at the whole project with fresh eyes.”

Kieron started a dialogue with the local planning department and, armed with a clearer picture of the council’s criteria, in both size and aesthetics, settled on a symmetrical floorplan of two four by four metre rooms, with a five by five metre room between them. At this point the proximity to the garden inspired the idea of timber-framed glazing, which is when Kieron contacted Oakmasters for a quote. 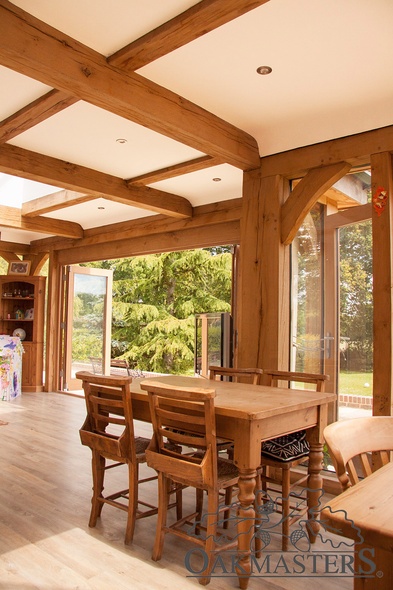 Although Kieron and Nicola had a clear idea of the spaces they wanted to create they went into the design stage with open minds. They were instantly attracted to Oakmasters’ initial designs, and with the exception of a few minor adjustments the final drawings were swiftly agreed.

Second time around the planning application was an altogether easier process. Kieron talked to the same officer who had dealt with the first application and an open dialogue about what was needed to make it work led to a simple acceptance of Oakmasters’ plans, which covered the first floor masonry bedroom extension as well as the orangery itself. Oakmasters recommended a local builder for the masonry work and supplied them with the plans. 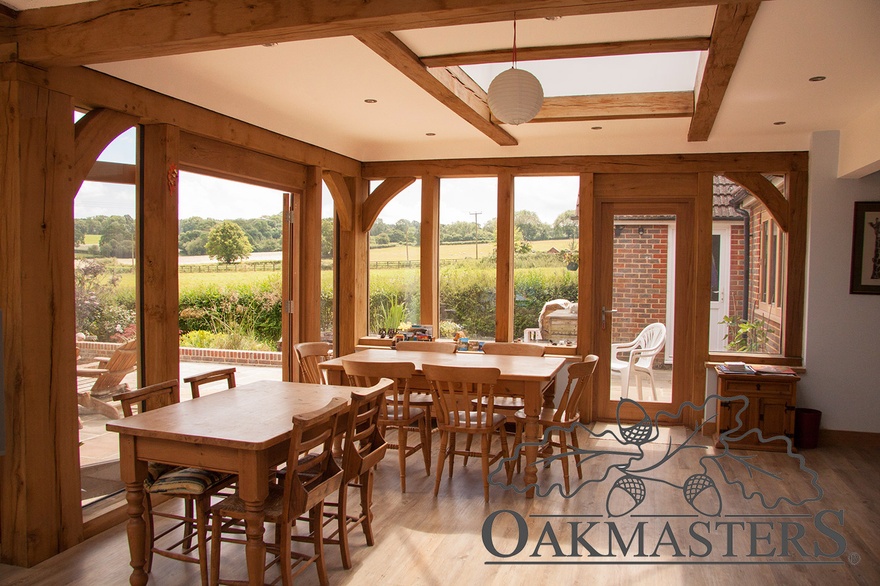 The entire build took 12 months. Kieron and Nicola stayed in the house throughout and worked with the Oakmasters team to find ways around some of the most challenging aspects of living in an active build, such as minimising the time the kitchen was out of action and sectioning off the back area from the rest of the home.

The extension was weathertight in February 2017, leaving the team free to polish up the final interior work and complete the project to an exceptional finish.

A WORD FROM THE CLIENT

“It was the style that first attracted us to Oakmasters, but price was another big factor in our final decision” says Kieron.

Despite living in the house the whole way through the build, he says the full impact of the orangery only became clear right at the end. “We started getting really excited once it was weathertight and we could appreciate the size of the space that had opened up.”

Kieron believes the final result has achieved a special connection with the outside that could not have been achieved with a traditional extension. “The oak frames allow us to view the house’s amazing aspect and the surrounding fields. It’s completely different to the distraction you get with uPVC and masonry. Now it just feels like a continuous view to 135°. Thank you for our wonderful extension.”

Visit the oak extensions gallery for this project and take a look at some of our other orangeries, garden rooms and sun rooms for further inspiration.