Self Build and Design Magazine 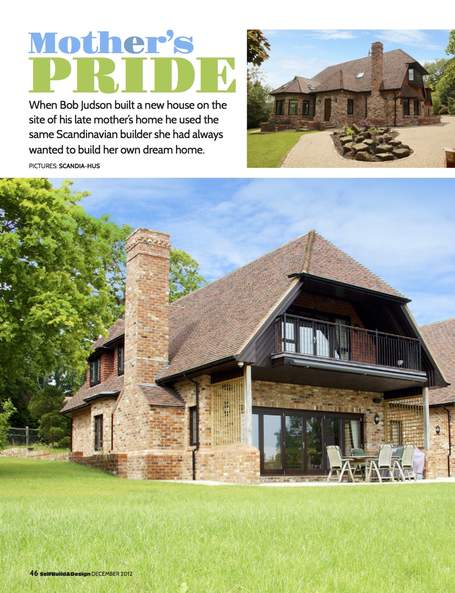 When Bob Judson built a new house on the site of his late mother’s home he used the same Scandinavian builder she had always wanted to build her own dream home. PictureS: Scandia-HuS

Although it occupies the same site as the previous house, the Judsons’ new home has been designed and orientated to make the most of the views.
Bob Judson first moved to the site of his new home almost 50 years ago when his mother bought the house and accompanying kennel facilities, following the tragic death of his father when he was only three. His mother continued to maintain the house and run the dog breeding and boarding kennels but once Bob grew up he decided to join the Royal Air Force, which subsequently took him all over the UK and bases around the world.
Bob recalls his mother wanted to renovate the property and even visited a Scandinavian timber frame company to discuss the feasibility of doing such a project. Unfortunately, at the time, it was beyond her budget so she kept her house as it was. When she subsequently died in 2007 it came to Bob and his wife, Saab, to decide what to do with the property. It
was Bob’s mother’s wish that the house and kennels should not be sold. However, as it had originally been purpose built as the kennels for a large estate, the living accommodation had been added later and was far from ideal. It didn’t even have a damp-proof course and wasn’t in the best position on the plot to lend itself to renovation.
Bob and Saab were aware that if they opted to sell the existing house it was unlikely that they would be able to afford to move back to the area in the future. They decided to investigate the option of a completely new self build on the plot and exploit its beautiful location. 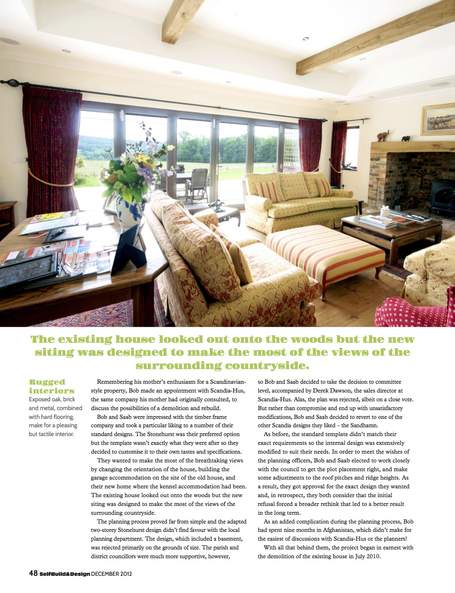 With all that behind them, the project began in earnest with the demolition of the existing house in July 2010. 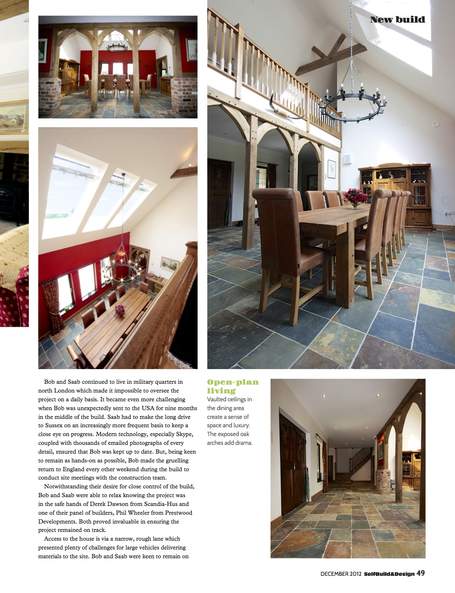 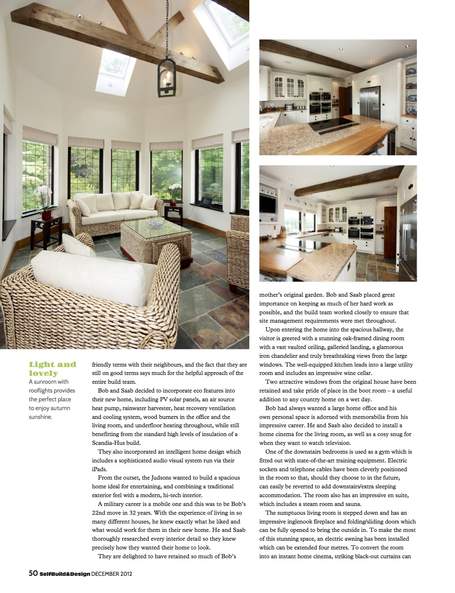 Bob and Saab continued to live in military quarters in north London which made it impossible to oversee the project on a daily basis. It became even more challenging when Bob was unexpectedly sent to the USA for nine months in the middle of the build. Saab had to make the long drive to Sussex on an increasingly more frequent basis to keep a close eye on progress. Modern technology, especially Skype, coupled with thousands of emailed photographs of every detail, ensured that Bob was kept up to date. But, being keen to remain as hands-on as possible, Bob made the gruelling return to England every other weekend during the build to conduct site meetings with the construction team.
Notwithstanding their desire for close control of the build, Bob and Saab were able to relax knowing the project was
in the safe hands of Derek Dawson from Scandia-Hus and one of their panel of builders, Phil Wheeler from Prestwood Developments. Both proved invaluable in ensuring the project remained on track.
Access to the house is via a narrow, rough lane which presented plenty of challenges for large vehicles delivering materials to the site. Bob and Saab were keen to remain on
Open-plan living
Vaulted ceilings in the dining area create a sense of space and luxury. the exposed oak arches add drama.

Light and lovely
A sunroom with rooflights provides the perfect place to enjoy autumn sunshine.
friendly terms with their neighbours, and the fact that they are still on good terms says much for the helpful approach of the entire build team.
Bob and Saab decided to incorporate eco features into their new home, including PV solar panels, an air source heat pump, rainwater harvester, heat recovery ventilation and cooling system, wood burners in the office and the living room, and underfloor heating throughout, while still benefitting from the standard high levels of insulation of a Scandia-Hus build.
They also incorporated an intelligent home design which includes a sophisticated audio visual system run via their iPads.
From the outset, the Judsons wanted to build a spacious home ideal for entertaining, and combining a traditional exterior feel with a modern, hi-tech interior.
A military career is a mobile one and this was to be Bob’s 22nd move in 32 years. With the experience of living in so many different houses, he knew exactly what he liked and what would work for them in their new home. He and Saab thoroughly researched every interior detail so they knew precisely how they wanted their home to look.
They are delighted to have retained so much of Bob’s
mother’s original garden. Bob and Saab placed great importance on keeping as much of her hard work as possible, and the build team worked closely to ensure that site management requirements were met throughout.
Upon entering the home into the spacious hallway, the visitor is greeted with a stunning oak-framed dining room with a vast vaulted ceiling, galleried landing, a glamorous iron chandelier and truly breathtaking views from the large windows. The well-equipped kitchen leads into a large utility room and includes an impressive wine cellar.
Two attractive windows from the original house have been retained and take pride of place in the boot room – a useful addition to any country home on a wet day.
Bob had always wanted a large home office and his
own personal space is adorned with memorabilia from his impressive career. He and Saab also decided to install a home cinema for the living room, as well as a cosy snug for when they want to watch television.
One of the downstairs bedrooms is used as a gym which is fitted out with state-of-the-art training equipment. Electric sockets and telephone cables have been cleverly positioned in the room so that, should they choose to in the future,
can easily be reverted to add downstairs/extra sleeping accommodation. The room also has an impressive en suite, which includes a steam room and sauna.
The sumptuous living room is stepped down and has an impressive inglenook fireplace and folding/sliding doors which can be fully opened to bring the outside in. To make the most of this stunning space, an electric awning has been installed which can be extended four metres. To convert the room
into an instant home cinema, striking black-out curtains can 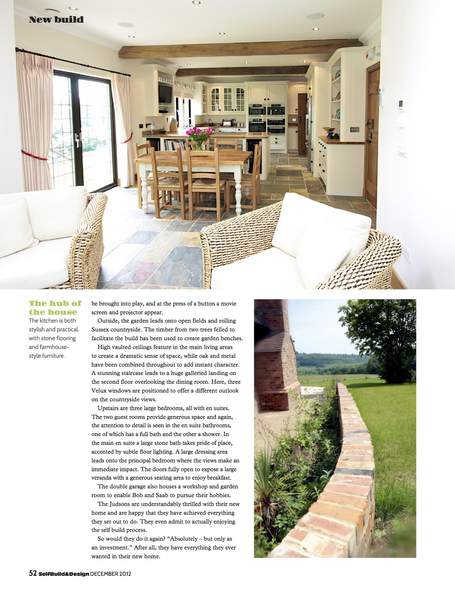 New build
The hub of the house the kitchen is both stylish and practical, with stone flooring and farmhouse- style furniture.
Formal snug
A snug area with a fire in the wall provides a cosy retreat away from the main open-plan living area. A dining area adjoins the atrium.
be brought into play, and at the press of a button a movie screen and projector appear.
Outside, the garden leads onto open fields and rolling Sussex countryside. The timber from two trees felled to facilitate the build has been used to create garden benches.
High vaulted ceilings feature in the main living areas
to create a dramatic sense of space, while oak and metal have been combined throughout to add instant character. A stunning staircase leads to a huge galleried landing on the second floor overlooking the dining room. Here, three Velux windows are positioned to offer a different outlook on the countryside views.
Upstairs are three large bedrooms, all with en suites. The two guest rooms provide generous space and again, the attention to detail is seen in the en suite bathrooms, one of which has a full bath and the other a shower. In
the main en suite a large stone bath takes pride of place, accented by subtle floor lighting. A large dressing area leads onto the principal bedroom where the views make an immediate impact. The doors fully open to expose a large veranda with a generous seating area to enjoy breakfast.
The double garage also houses a workshop and garden room to enable Bob and Saab to pursue their hobbies.
The Judsons are understandably thrilled with their new home and are happy that they have achieved everything they set out to do. They even admit to actually enjoying the self build process.
So would they do it again? “Absolutely – but only as an investment.” After all, they have everything they ever wanted in their new home.